Do you have enough typewriters? 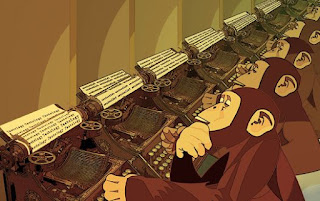 I really like the idea that 'if they haven't learned it you haven't taught it'. It completely turns around the paradigm that it is the responsibility of the learner to learn. And if you adopt the idea, it challenges the standard paradigm of high performance sport. Yes, that's right!

The key difference is the way you approach things. If only one person needs to learn for you to be successful coaching your squad, then you can afford to do the same thing until someone ends up working it out. You don't need to change how you are doing things, you don't need to personalise, you don't need self-reflection and research to find better ways of doing things. But if you need all your athletes to be the best they can be, you have to work differently. 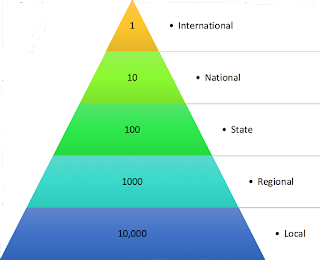 There are a number of flaws to this theory (really, there are a LOT), my two favourite at the moment are:
A similar concept to the pyramid theory is the Infinite Monkey Theory. I'll heavily paraphrase, but in the context of sport it says that, if you have enough unskilled practitioners working for long enough, you will succeed eventually. And this theory, anecdotally, has been proven. I've worked with a program which has been a leader in State and National competitions for a couple of decades. Over this time their deserved success was due to a number of things, but technical excellence was never one of them. Recently an athlete has come through the program technically excellent in all skill areas. He was taught the same as everyone else, but somehow ended up technically proficient.

So with one theory, the coach finds a way to get the most out of the athlete no matter what. The other says that if you work with enough athletes, eventually one will make it to the top. But one other key variable is time, and if you have a finite time to achieve high performance success, the only real question is, do you have enough typewriters?