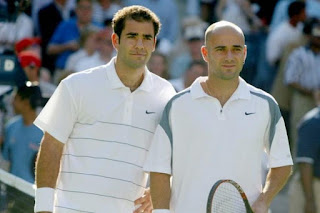 The most fascinating example of 'momentum' I have ever seen was in a couple of tennis matches between Agassi and Sampras. It seemed like the momentum was I the balance for about 99% of the match. Sampras would win serve, Agassi would struggle a bit but win serve. And then there was a moment. Maybe at 30:30 and Sampras served a double fault. You could see Agassi knew this might be the only chance he had this set and the momentum was with him momentarily. He looked different. I get goosebumps just writing about it now. Somehow Agassi gets the next serve back into play and wins the rally and the game. Then the momentum went back into the balance for another 40 minutes with neither having an advantage.  Until Sampras would seize his tiny moment.

Momentum is defined as: "Impetus of a non-physical process, such as an idea or a course of events."
To describe an intangible concept such as momentum in sport is difficult, but basically: ‘advantage’ that exists in competition. That is, there are times when a particular team has the advantage - when the game seems to be flowing for them, when the ‘ball is bouncing’ for them. There are also times when neither team seems to have an advantage, when the game is on a ‘knife’s edge’. Managing and manipulating momentum is another example of knowing/understanding your environment. Recognising it and actively working on it is a part of understanding the game and ‘Being in the Moment’. It is one of the things in the ‘moment’ to be aware of.

There are three distinct phases of momentum, and these phases are independent of the score.

Figure 1
These are largely self-explanatory, but the important point is that there are THREE phases. Imagine momentum as a see-saw rather than a scale (as shown in Figure 1). It can only be in one of three places: with your opponent, with your team, or in balance.
This means that to change momentum is not a question of gradually dragging the momentum back towards balance. All it takes is a catalyst - one action or outcome. Be it an amazing play by your team, a bad error by your opponent, even a ‘generous’ call by an official. But all it takes is one thing.
As described in Figure 2 the catalyst starts the process of momentum change. It can be as simple as a coach reminding the team of their responsibilities, or as prosaic as a miraculous or desperate play.
This progresses, through belief and, importantly, the motivation to change, to a change in State. It is this change of state which manifests the change of momentum.

First you need to identify what must happen, what phase you are in. This sounds simplistic, but when under the pressure and stress of competition it is not easy at times. To do it you need clarity, awareness and honesty. Remember, we are talking here about understanding. False bravado has no place here, nor does blind optimism. If you don’t have the momentum that is ok - because you know it is only two plays away from being yours. Good teams and players can recognise where the momentum is.

Figure 3
So, identify where the momentum is then work out what needs to happen and what needs to change. This is what you see with great individuals and teams, the ability to identify the moment in a game when the momentum can be gained. Something happens, and all of a sudden what was an even game seems like it is out of reach of one of the teams. A very clear example, for those who remember it, was Michael Jordan’s last game for the Chicago Bulls - in the playoffs against Utah. Game 6 was in the balance and Jordan made a play which sealed the game. It wasn’t that perfect last shot, but a steal against Karl Malone. From that moment, it seemed like the Bulls would end up winning - even though they were behind at the time.
So what do you do to get the momentum once you have recognised what needs to happen? It is not about skill, more about exerting will. It is not even about giving 110%. Just about being in the moment. We have talked about the Zone and those moments of beauty and clarity that players find from time to time. This is how to use the momentum: managing your State and having everything at your disposal. Once you have recognised what has to be done - then it needs to be done! And the best way to do it is always to clear any external distractions and just play.
As with everything else in this book, we believe it is something that you can learn and, once you have learned how to identify it, you can manage in competition. But don’t forget, if there are two teams or players both working on this as the same time, it is not an easy process and by no means a recipe for success. But the Conscious Coach can develop State Management to be an effective tool for managing momentum.
I was coaching in the Australian Volleyball League. The team was strong, filled with current and former National team players. However as captain I chose one of the youngest players. An 18 year old who I thought epitomised the sort of competitiveness that I the team needed to display. Throughout the season there would come times in sets when I would walk over to the sideline and quietly tell her, ‘now is the time’. Every time I did this the expression on her face would change slightly, he body language would change slightly, and she would go about exerting her will on the rest of our team, and our opponent. We lost very few sets that season. The point here is that you don’t have to have a deep understanding of the game to manage momentum, but if you have someone on your team who can recognise it and someone who has the strength to do something with the information, you can regularly gain advantages over your opponents.
(Photo Credit)
Analysis Analytics Behaviour Champions Coaching Innovation Learning Performance Science Strategy Superstition Volleyball Winning