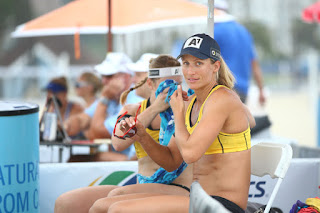 There has been a lot written about the impact of indoor volleyball timeouts, with the findings that timeouts don't impact the chances of siding out immediately afterwards. (A collation of which an be found here.)

Recently, through the generosity and support of Volleyball Australia, I was able to obtain a database of match analysis (similar to the work done using Datavolley for indoor volleyball), and analysed this, looking for indications of the impact of timeouts on match flow.

The data is predominantly from international competition, ranging through Olympic Games, to World Tour, to continental tour, to national tour. Nearly 1,300 matches were analysed, (over 3,700 timeouts).

The results of the analysis was that:
So, from this analysis, there is no evidence that a timeout makes a difference to the likelihood of siding out the next rally.

There is a thorough explanation of the process gone through, by the spectacular Ben Raymond, here.

After investigating a number of different subsets of this data, there was some evidence found that timeouts make a difference in the following scenario:

Once again, thanks to Volleyball Australia for their support in this project.