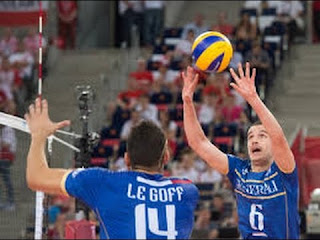 I have to admit I've really enjoyed watching the Volleyball Nations League this year. In particular, the finals were great, and one of my favourite things to watch was the French Setter: Toniutti.

I really liked watching him because he could do things that other setters didn't seem to be able to do. I also liked watching him because he is one of the best couple of setters in the world, and he is 6 foot tall. For decades the prevailing wisdom in the volleyball world has been that everyone in volleyball is getting taller. But for all these predictions the fact do not bear it out, or, at least, not to the extent that is made out. Sure, the winning Russian team had outside hitters who were 6-7 and 6-9, but the best outside for France is only 6-4.* It is clear to everyone that you have an advantage in volleyball if you are tall. But, as volleyball is a game of skill, you also have an advantage if you are more skillful than your competitors.

There are many myths in volleyball that don't stand the test of, well, testing. My favourite example with setting is that, for my entire professional career in volleyball (30 years), coaches the world over have looked for 'tall, left-handed setters'. The theory being that they can reach and hit, as well as set. But with almost all coaches around the world searching for tall left handed setters for 30 years, I can think of only one winning a medal at a top international event (Jeff Stork, and he wasn't even that tall!).

But getting back to Toniutti. One of the things I loved watching was when he ran a play with a wide quick in front, and a fast ball to the corner. When he did that he would drop his hands, so his release point was lower than it would normally be. Because of this height and angle (and probably hesitation), it actually made the play more difficult to block (not just my opinion, I was told this by a player with over 300 internationals), and you can see one of the best blockers in the world (Muserskiy) completely baffled by it on at least two occasions in the final.

For anyone who is interested in knowing more about how to identify and train setters, you should have a look at this excellent book by the best setting coach I've worked with.

* Yes, they are getting taller (I'm not blind), but not very quickly. And not all positions. Middles more than others.
Analysis Behaviour Champions Coach Coaching Culture Development Leadership Manager Talent Volleyball Winning