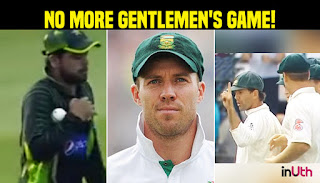 There has been a lot of media in the last day or two about the Australian Cricket team cheating in a test match in South Africa. The specific cheating was something called 'ball tampering', which is to illegally affect the surface of the ball in order to create an advantage when bowling.

I don't know for a fact, but I'm sure that the justification for doing this would have been: "We are sure our opponent is doing the same, so we are only doing it in order to create a fair competition."

Now, this is not completely unreasonable. In fact, one of their opponents has been twice suspended for doing exactly the same thing. What's more, there were suspicions Australia were tampering with the ball in their recent series against England, but surely this is just evening things up from the series in 2005 where England tampered with the the ball. Right?

And then there were the complaints by the Australians earlier in the series that the on-ground microphones should be turned down, because it was picking up their verbal abuse of the opposition players, and they didn't think this was appropriate. I remember thinking at the time, do they even realise the line that are crossing? Complaining that the biggest issue about verbally abusing your opponent was that others might hear it?

People have always cheated in sport, and every time it happened it was justified in some way. The, 'I'm just evening things up because THEY are all cheating' justification is part of the culture in some sports. That is why you don't know who won the Tour de France until 10 years after the race nowadays, once all the testing has been completed.

Australia has always had a proud and pure relationship to sport. It is not perfect, but it has always made me feel like I was on solid ground whenever talking about cheating. Cricket has always made me feel uncomfortable, with their determination to justify that verbal abuse was just part of the game. With the fact that players who have bet against their own team, and won, are folk heroes because if it. With a star player took a steroid masking drug when he was returning from surgery, and it was laughed off as vanity. It will be interesting to see how this pans out.