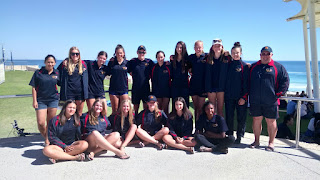 This is a dedication to all the posts and comments I read saying 'well I saw this coach do that and they won, so that's what I'm going to do'.

This is about a team that won.

I coach the players in a development squad where technical and physical competency is the focus. I also coached them in preparation for the annual National Championships. In the tournament we went 9-0. During the tournament I never pushed them. I never cheated, or even 'pushed the envelope'. I always asked them the game plan first, before giving them my thoughts. I never talked about winning. I didn't compromise the development of the athletes for short term success, either during preparation or the tournament itself. In the final, when the captain asked me which side they should pick I told her to decide herself. Was it easy? Not at all. The hardest thing was forcing myself to say say or do nothing at times.

The team developed enormously DURING competition AND worked on things for the future.

These principles I coached by are based on research, not anecdotes (which is all this is). And we (they) won. And there was luck involved. There always is. But they won.

So all those people out there who rationalise poor (and at times abhorrent) behaviour by coaches and justify it by saying they won, this team won too. All the people who rationalise short term focus saying that they can't do long term development concurrently, this team did both.
Behaviour Champions Coach Coaching Development Gymnastics Innovation Leadership Learning Performance Planning Talent Volleyball Winning