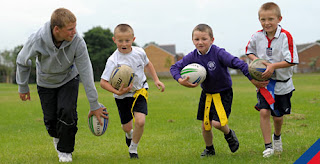 'Winning is a Limitation'. It's a throwaway line I first started using about 20 years ago. I like it because it can make you think and also because there is some truth in it. The point of the phrase is to give permission to athletes to be working on things other than just winning, and also to help coaches recognise how their own needs are reflected in their coaching.

Is winning actually a limitation? Of course not. Is losing a limitation? Of course not. Having said that, focussing exclusively on winning, to the detriment of trying new things, clearly limits development, just as completely ignoring the outcome does. But, as they say, winning 'conceals' and losing 'reveals'. I think this is a saying but if it isn't then I will trademark it.

Once I was running a junior National camp where the focus was on skill learning and I wrote 'Winning is a Limitation' on the whiteboard. I wrote this in order to emphasise to the athletes (and coaches) that we were assessing them on their ability to learn and change, not on whether they won a drill. After a lunch break on day two I discovered someone had changed the writing to 'can be' from 'is a'. I was astonished that anyone would find just having this written down so threatening that they couldn't stop themselves from changing it. So I changed it back.

Another example of how to manage this balance occurred when I was talking to a coach, who is a former elite international athlete from a different country, and I asked what the most difficult thing about working in Australia was. He said that it was balancing the need for the systematic development of fundamentals with the requirements for competition success. I asked how he managed it - he said that he focusses on good development and makes sure the athletes understand this will limit (NOT eliminate, just limit) their immediate chances for competition success. I asked how he managed the parents in this situation, he said 'I tell them that is what I'm doing'.

The danger with the 'winning/development' paradigm is that many people try to turn it into a binary argument. That is - you are either doing one or the other. In my experience, these are people who want a justification to focus exclusively on winning the next competition they are in. It is not binary. You can win AND technically develop all your athletes. To paraphrase JJ Watt, if a coach encourages your child to focus only on winning, they don't have they don't have your child's best interests in mind.