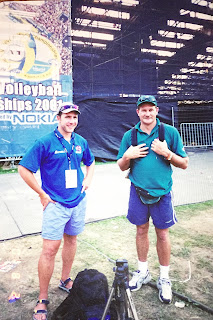 I've been talking a lot to people about coaching development over the past year or so and it has got me thinking about my coaching career path (aka 'journey').

The first 'serious' coaching role I had was an U17 boys team at Nationals. I had never coached a group like this before, so I did what any young coach would do. I got hold of all the scoresheets for the U17 boys division the previous year, worked out what sideout percentage the best teams had, and designed all drills in our preparation around achieving that sideout percentage. What else would you do?

I'm currently coaching a group of U17 girls at Nationals, and am somewhat embarrassed to say that I have not done anything like that in terms of preparation. Having said that, I think I'm twice as good a coach now than I was 10-15 years go.

I was reflecting to a friend recently on those times around the Sydney Olympics. At that time I was one of the coaches in a beach volleyball program which won a Gold Medal. I also personally coached 2 teams to 9th at Junior World Championships, and had won a women's National League Gold Medal. At that time I know I would have thought that I was twice as good a coach as I actually am now. I just didn't know what I didn't know.

I think the main difference between now and then is passion. I love coaching, but it doesn't consume me in the same way it did back then. I now know much more about technique and motor learning. I know much more about systems of play and physical preparation, about working in complex structures and managing expectations of parents, about sports medicine and 'managing upwards'. And the reason for this? I always wanted to learn. I wanted to learn about everything. About coaching, about philosophy, about budgets and financial management, about data management and management systems, about skill learning and machine learning. I always felt I needed to know about everything to be a better coach.

I think its critical for a coach to have that same sort of passion I used to have. And there are huge benefits in not knowing what you don't know. (If nothing else because you can't get paralysed or doubt yourself if you don't realise the problems which might be just around the corner!) But at the same time, you can't be successful without both. You need the passion to win at the very highest international levels, but it doesn't cover up much lack of knowledge. Just as all the knowledge in the world doesn't make up for a lack of passion.