Tactics and Strategy and Jose Mourinho 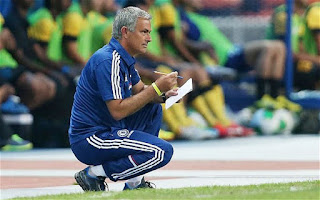 Recently, a friend sent through this article on Jose Mourinho, and an interesting email discussion ensued. The article could be (and was) argued to be quite a superficial article, saying that Morinho wins 'because he has "tactics" and "a fascination for details and process"... and a lot of money. Has he won without spending a lot of money?' HN

It has actually has more insight than most articles I see on any topic. He won the Champions League with Porto, so yes he has won without spending money. And Champions League with Inter was also relatively (compared with the English and Spanish teams he beat) little money. And money does not guarantee success anyway. How he wins is fascinating. Because there are very, very few coaches who ALWAYS win. And he always wins.

I agree. I love the idea of 'fascination for details and process'. It makes a lot of sense to me that THIS is the key winning wherever you are, all the time. Others can win because the environment and players suited to them (Ferguson?). Others can get teams 'over the line' through ra-ra speeches, etc. But the fascination for details and ability to implement this no matter what the situation is pretty freaking rare. As for spending money - we know that there is a direct correlation between the most money spent and not winning. The team who spends the most never wins! (evidence - all American sports teams)

This what I don't like about it: As Campbell points out, Mourinho’s objective is always winning, his strategy is to be the best tactician, and his tactics are about how he applies that in practice, game by game, minute by minute.

Doesn't every coach want to win? Don't they all use "tactics"?

‘The tactics are the model, the principles. So let’s say, day one, I come in, I want Chelsea to be a team that is always pressing, high up the field, high pressing, blocking, that is what I want. The basic tactics are made up of, say, twenty items. So, when the keeper has the ball, does he go short or long? That is a tactic,’ explains Mourinho.

So the secret is in keeping count of tactics?

‘When the other team has the ball in midfield, where do our players go, what do they do, what is their aim at that moment? When a striker moves into this area, that area, what is he looking for, what is he trying to do, how do the other players react, when he moves there, where do they go, what are they looking for, what are they trying to do to the opposing defenders? These are parts of a tactical model. They are like the DNA of the team, the tactics that say what kind of team we are.’

SO he's the only one insisting his highly paid team and players use tactics?

These are ingrained in the players through hours and hours, day upon day, of training habits and decisions to make sure the tactical plan is understood and executed.

That's where everyone else is going wrong. They're not practicing their tactics. Thanks for the trade secret Mourinho!

‘Strategy – being strategic – this is when you do something for a certain moment or a certain game. Every game we analyse opponents: real depth, real detail, and then we try to predict how they play and we say “so today we add a particular strategy to our tactical system”. If we play Liverpool at Liverpool we add this to the way we play. Then maybe the next game is Hull City at home and we play a different way, we make this strategic plan, we add it to the tactical model. The basic tactical model is the same, the strategy depends on the moment, depends on the context.’ How enlightening! You should use different strategies for different opponents and achieve this through scouting.

No wonder he's the best.

All coaches want to win. All coaches think they use tactics. Many don't really. Maybe its not about keeping count of tactics, its about limiting them. Its about having a very clear set of tactics that can be used when needed, training them, and implementing them as required. Insisting players practice these things is actually a very difficult thing to do. Not necessarily for the players, but it takes a lot of mental discipline by the coach to stay focussed on this and not be reactive.

You definitely should use different strategies. All people know that. Very few are capable to successfully implementing it. And even fewer are capable of teaching their team a 'suite' of strategies which will be effective against any team they play. Even coaches with the discipline to operate like this are generally limited by the ability of their players.

Working out tactics and strategies is relatively easy. Teaching them to a series of disparate teams is not. The thing I like about the article is that the 'secret' is, as you suggested, not rocket science. Its logical, sensible systematic thinking. But to actually implement that in a variety of teams is not easy, as evidenced by the fact that no one else has ever done it, in any sport.

I'm assuming it's not that he uses tactics that is interesting, it's what those tactics are and how he executes them. In that sense the piece doesn't offer much but a deeper explanation more likely requires a book than a few quotes. I still got a bit from it though.

I don't know much about him but it made me think of a coach that spends a disproportionate amount of time on tactics and planning and then is a master of execution. It made me reflect on my own coaching and how unfocussed it has been compared to the clarity of purpose he has. I would expect that all of his athletes knew in detail exactly what their role was in the system and had the training to execute. It made me think, if he just does those things that we all do (like tactics etc) then how might he do these things differently to get the results he does?