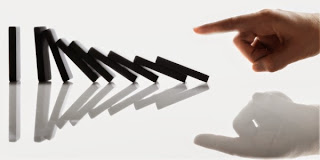 The biggest problem we have though, is when, in High Performance sport, we try to use technological systems to replace human interaction.

For some tasks you need to create Trigger Points - where the data suggests that these two human beings should discuss things. So rather than having an email message automatically sent saying "there is a problem", we need to have an email message automatically sent saying, "there could be a problem, you need to get on the phone to Johnno about it, and here is his number. Go on, call him now. I said now. Don't put it off. Just get on with it."