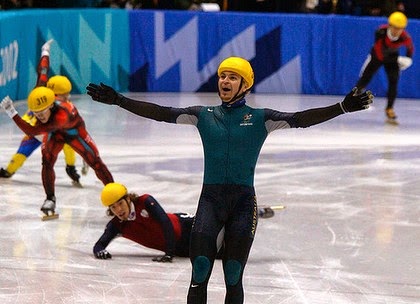 I've had the debate a number of times over the years about the difference between playing not to lose, and playing to win. Sometimes it seems complicated but really it is a simple risk/reward situation.

I've had the debate about a team who played a high risk strategy which relied on a very high level of skill and a completely different game style to anyone they competed against. The argument was that it was too risky to win a gold medal at the Olympics. The proof of this being, of course, that the team didn't win a medal at the Olympics. But the alternative was, on a really great day, if things went their way, they might make the top 8, but wouldn't make the top 3. And they were playing to win.

The idea came up more recently at the Australia Open when a player was derisively described by a commentator as a gutsy little player without the weapons to beat any of the big players (though occasionally she does.) In tennis, with the millions to be made, playing not to lose seems like a very sensible strategy!

In many sporting environments, getting the absolute best out of yourself, and giving yourself the best possible chance to succeed, requires a pragmatic assessment of an your ability. Teams are full of players who get the most out of themselves but who aren't the ones who will win the game for you. But if success is defined in high profile sports by how much money you make, or the length of your career, or a ranking in the top 50, why would you not be satisfied with getting the most out of yourself? In some situations this strategy will enable you to make millions and achieve a huge amount of success. In sports the same strategy will have you marked as failure ('oh, you made the top 8 did you, that's nice).

So, when the goal is to win, you need to find a way to give yourself a chance to do this. You can't sit back and come up with a strategy that requires opponents' poor performance to succeed. When you are trying to win, you have to play to win. That sometimes requires risk, but it always offers reward.


PS - I feel bad using Steven Bradbury as the picture on this story but it was too perfect not to. For anyone who thinks that he should be the 'poster-boy' of the strategy to avoid losing should read more about what he achieved in his career.