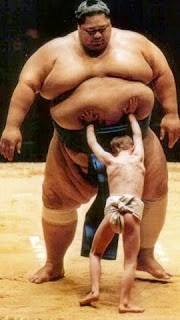 There have been many stories in the 'David and Goliath' mode through the centuries. All involve an overmatched competitor somehow winning against an overwhelming opponent. Unsurprisingly there have been very few popular stories where the overwhelming favourite comfortably defeated its opponent. Despite the lack of anecdotal evidence, I would suggest that this is the far more common occurance. As fun as underdog stories are, given the choice, most people would rather go into a contest with the odds stacked heavily in their favour.

One of the things that people love about sport is the relative 'even-ness' of the competition. Salary caps and drafts attempt to create this situation artificially in many leagues around the world (but not all). And then there is the old adage that a Champion Team will always beat a Team of Champions. But what are we really talking about with these two types of teams?

The Champion Team is the one where the whole is greater than the sum of the parts:

Using this terminology, a team of champions should, at most, equal the total of the parts. But the general use of this expression is that the team of champions actually ends up being less than the sum of its parts:
TeamChampions = Sum(players) - y

Basically, we are saying that a Team of Champions is a Frankenstein monster. It has really good parts, but they don't necessarily work together as effectively as a Champion Team, therefore not optimising the individual abilities. Therefore, as they say, the Champion Team will win.

Except of course, they often don't.

Sometimes the individual brilliance of the champions just overwhelms the battling players who selflessly complement each other. Sometimes the 'Sum' of the Champion Players is simply too big, regardless of the negatives in putting them together.

Sometimes the brute force of Goliath simply overwhelms the tactical and technical brilliance of David.