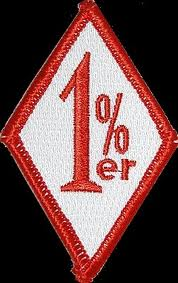 I heard a coach talking about an athlete the other day. They said, 'he is one of those athletes who think that 100 1%ers actually add up to 100%'. For the record, we aren't talking about these 1%ers, but these. That is, the 1%ers which are constantly talked about in sport. Here is another example.

Essentially, a 1%er is considered to be something which may contribute to success over time, but has little instantaneous value. They are seen as the solution to 'getting over the line'. They are seen as the 'icing on the cake', perhaps even the star on the tree. Yet in a sporting world increasingly reliant on scientific evidence for decision making, there is very little evidence exactly how much these things contribute. That is not to say they are not important in their own right, but what is their actual value? We call them 1%ers, but what are they really worth, and if spend all your time doing 100 of them, does that guarantee success?
From everything I've read, successful athletes (and successful people in other areas) spend a great deal of time getting good at the fundamentals of their sport. They work very hard physically and technically. They invest a lot of time, effort, and often money in their pursuit of excellence. When all this is established, it is a good time to think about the special things that might make a small difference, which could be the thing that makes the ultimate difference.

The problem with 1%ers is that they all take time. They stop you from doing something else, and that might just be more valuable than the 1%er you choose.

In the end, part of the art of success is working out what not to do, and working out which 1%ers are worth investing in is a critical component of this.
(Photo Credit)